IT Jobs Report September – Not Exactly Business As Usual, But… 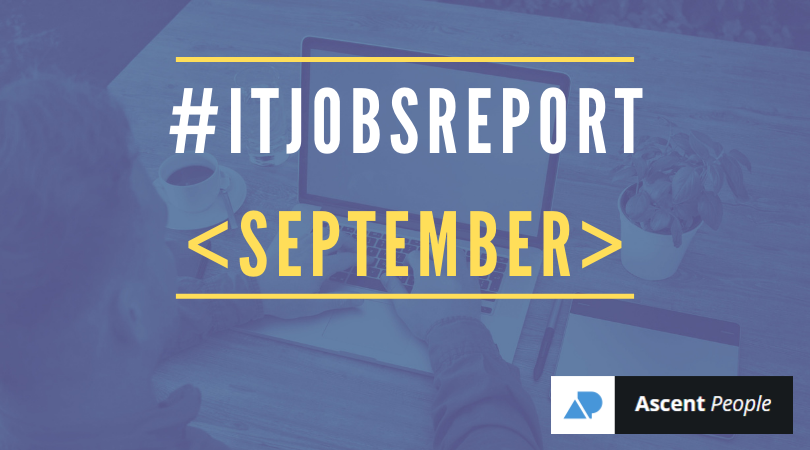 In a nutshell, hiring is up for this month. This means there were noticeably more jobs available for both permanent and temporary staff in the IT sector going into September.

That’s the good news for IT recruiters. The bad news is that interviews still aren’t happening face to face and they aren’t anywhere near the levels seen before March.

Welcome to the New Normal

This phrase is and has been overused, but for the IT industry and those of us recruiting within it, we are certainly seeing what the character of this new normal is going to look like. At least for the rest of this year, and no doubt much of the next as well.

Face to face interviews are off the table, video interviews and remote onboarding are in. There’s no doubt that IT recruitment today looks a lot different than it did this time last year. But for many of us IT Recruiters, who are actively talking to both candidates and IT Managers, the process of searching, prepping and ensuring they turn up for the interview on time (virtual or otherwise) remains very much the same.

Hiring managers are still looking for the same characteristics in candidates, even if they aren’t going to see them on a daily basis around the office. If anything, we’ve found it true that clients have remained loyal to IT Recruiters who have served them well over a long period of time, not just those who might be knocking loudest at the door.

In short, the IT recruitment industry and the jobs we place certainly isn’t dead on its feet. And whilst it isn’t positively buoyant either, there are plenty of hiring taking place from clients needing tech talent to take projects and infrastructure forward.

It feels a little like an evolution in both process and expectations within the industry. We aren’t racing around the country meeting clients, but we are staying in touch and working to propel our business and clients’ business onward and upward.

The Key Stats in IT Jobs Growth in September

Firstly permanent placements and temp billings saw a return to growth. Hiring numbers were up and the continued relaxation of social distancing measures enabled the economy to at least try to get back to what is normal operations, albeit under increased appreciation of safe working environments for both staff and customers. Offices started to open up and people actually managed to go out.

Secondly, there was an increase in candidate supply as IT candidates start to take stock of their careers; either through the opportunities that are presenting themselves or because tech employers haven’t renewed contracts or tightened their belt buckles. In fact according to recent figures the rate of growth of candidate numbers was the second sharpest on record after December 2008 and after the significant financial collapse experienced across the UK economy.

Thirdly, salaries and wages experience a decline. Because of the financial crunch experienced across all industries in the preceding months, demand for staff dropped and this was clearly seen in the salary expectations and this coincided, not surprisingly, with an expected increase in staff availability.

Commenting on the latest results James Stewart of KPMG clarified this positive outlook, “It’s positive to see an uptick in hiring activity (particularly for temporary staff) which could mark a turning point with businesses appearing more willing and able to hire as more parts of the UK economy reopen. But with total candidate availability rising at a near-record pace, strong and sustained rises are needed to move the UK jobs market back to levels seen pre-COVID – and with concerns around a possible second wave of infections, the winding down of the furlough scheme and a Brexit deal outcome, there are still many challenges ahead.”

IT Jobs in Demand Right Now