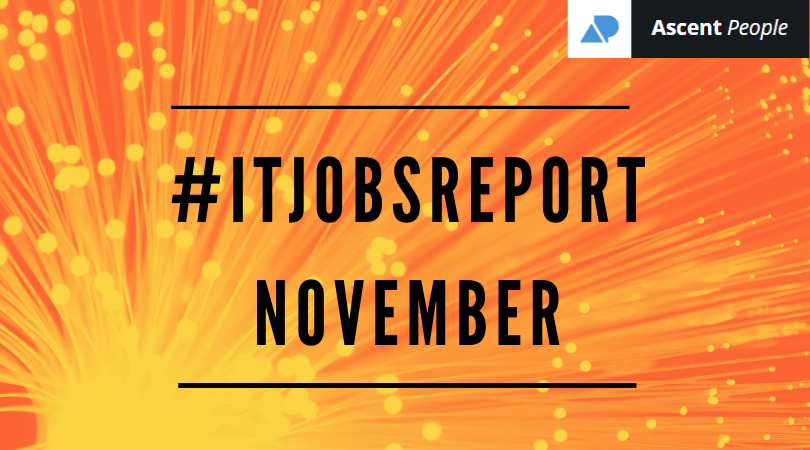 If anything is clear businesses and tech firms are clearly in a much more resilient mood than they were this time last year when blissfully ignorant of the coming travails 2020 and the pandemic would bring.

The Chief Executive of the REC, Neil Carberry put it best when he stated recently that October and November, “brought a dose of realism after a quick economic bounce in the

Summer”. There were lockdowns and new restrictions throughout the UK. Nevertheless IT recruitment and hiring continued, albeit abated.

Business might be bouncing from one difficult set of circumstances to the next, but almost everyone in the IT recruitment industry would agree, that most are better placed to handle it now, than they were in March, when recruitment fell off the cliff.

UK businesses are not alone in expecting, and hoping, that the vaccine will bring some much needed stability back to the economy and a return to a more predictable version of normal in 2021.

The cliff drop of 2020, but can the dim glow of recovery be sustained?

The IT Jobs View from the Midlands

Despite the belief in the UK that places like Leicester and Nottingham have been much worse hit with symptoms of the pandemic and experienced heavier lockdown restrictions, the Midlands IT job market has actually been stronger than it looks.

Both temp and permanent placements rose for a third month in a row in the October to November period allowing the Midlands to beat expectations in direct comparison to other UK regions.

In particular, temporary placements were up in October in the Midlands region for the fourth time in as many months. It indicates either extended capacity of firms after the strict lockdown measures, local resilience or, more likely, the end of the first government furlough period.

Permanent job vacancies however continued to fall though, with companies and major IT employers remaining cautious about hiring during the pandemic. However this fall was mild in comparison to previous months, which further indicates confidence might be returning to IT recruitment in the Midlands.

The IT Jobs View from the North

Similar to the East Midlands, the North of England suffered a considerable toll in lockdown restrictions throughout October and November. It places jobs availability in a precarious position at a time, especially in the IT industry, when business slows up before the New Year’s restart.

In the North the furlough scheme offered some financial support for workers, but not necessarily any impetus for IT employers to push through projects and embark on longer term hiring strategies. And it remains to be seen how the government will continue to support the Northern economy after public backlash from the Mayor of Manchester over lockdown funding, and the legal furore hanging over his Liverpool counterpart.

Meanwhile jobseekers will be left to find opportunities and navigate their vocational path through this crisis themselves.

into permanent job roles in October to November. While this might have been modest, it most certainly can be blamed on COVID-19. This also meant that firms were choosing the preferred option of taking on short-term staff instead.

The furlough scheme extension (until 31st March 2021) will offer some level of respite to workers and business, but while the need for it continues it only serves to fuel increased economic uncertainty. Which is never a strong driver of jobs creation and project funding. Unless, of course, your activity is vaccine development.