IT Jobs Report October – The Storm In The EU Brew 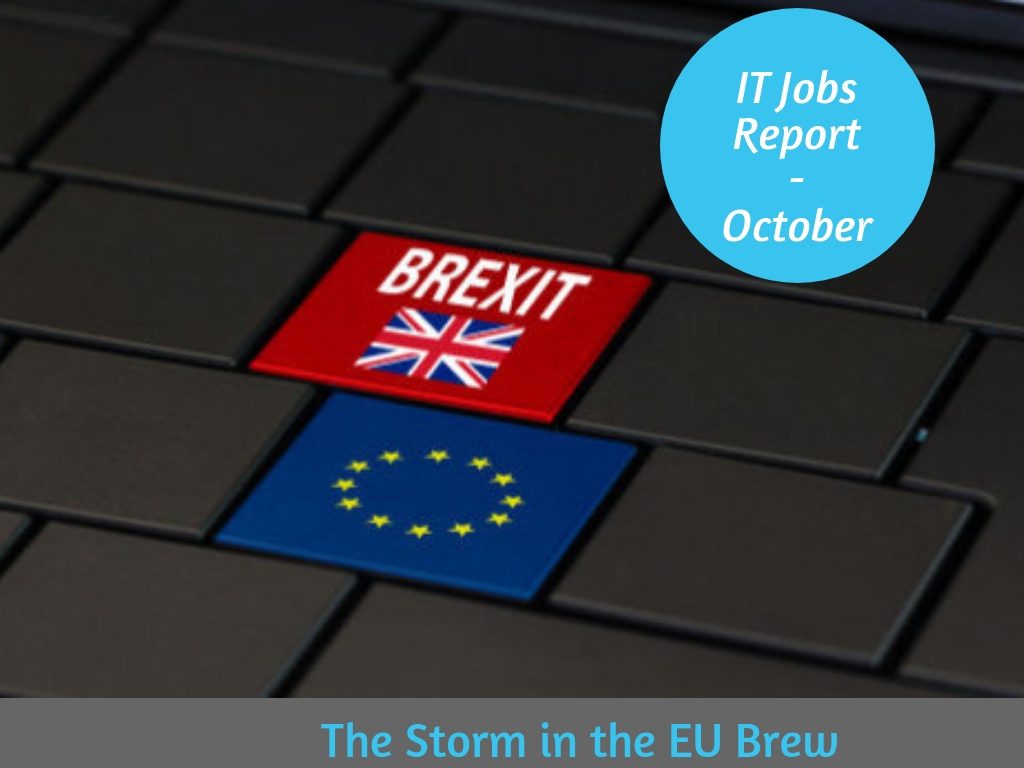 After the hot Summer and the warm October we haven’t yet experienced the turbulent weather Autumn is famous for. Hold your breath, because with Brexit not much is happening in the way of firm agreements, but once they do, the proverbial will probably hit the fan, and it will hit the IT labour market hard.

IT Candidate Jobs Slowing Down

One of the key points that can be taken from the latest IT industry figures is that IT jobs might at last be starting to slow down as vacancies finally reach a two year slow in growth.

One of the big indicators was the slow down was the slowest for 48 months combined with a rise in temporary placements last month.

And this is one of the biggest ironies regarding the looming Brexit deal or no deal.

IT is an industry where demand tends to exceed supply; there are often more jobs available than experienced or qualified enough candidates. Meaning that it will always need to hire from abroad to ensure it fills the growth of IT roles in the UK. Which isn’t exactly a traditionally Brexit-oriented view!

But that’s besides the point, it always has. The only problem after the Brexit deal or no deal will be what happens to the enormous amount of talent – some of which has already hot-footed it back to Europe – that the IT and Tech industry utilises from across the other side of the English Channel?

Perhaps only time, and further increased competition will tell.

We can be sure of one thing at Ascent People: We’ve seen increased difficulty in finding the right talent for clients.

And when that talent isn’t quite what is expected because the available candidates just aren’t as qualified as hiring managers have previously known, that’s when placements experience less than smooth transitions.

The Opposite Side Of The Coin Is Higher Pay

Salaries in IT are certainly back on the rise. Last month starting salaries for permanent placements increased at its sharpest rate since April 2015 and temporary placements also saw another rise.

This always goes hand in hand when candidate availability for permanent job roles decline and this has been continuing for almost five and half years.

Obviously a low unemployment rate also has plenty to do with this.

What this all means is that clearly people were reluctant to seek new roles with the Brexit-related uncertainty.

IT Report In The North & The Midlands (our patch)

Interestingly the region that performed better that all the others was London. Both the North and the Midlands performed roughly in line with the national average in terms of both permanent candidate availability and permanent jobs.

The weakest expansion of IT roles and placements was felt in the North which experienced a slower rate of permanent placements too.

The availability of temp workers decreased at a faster rate across the UK as a whole, reflective of sharper deterioration in the South and London. Conversely, the Midlands and the North recorded slightly softer falls in the supply of temp workers. And this was also reflected in the softer increase in wages experienced by the North  too.

Key IT Jobs In Demand:

Visit our jobs feed for your next IT role.