Why Do Candidates Miss Interviews? 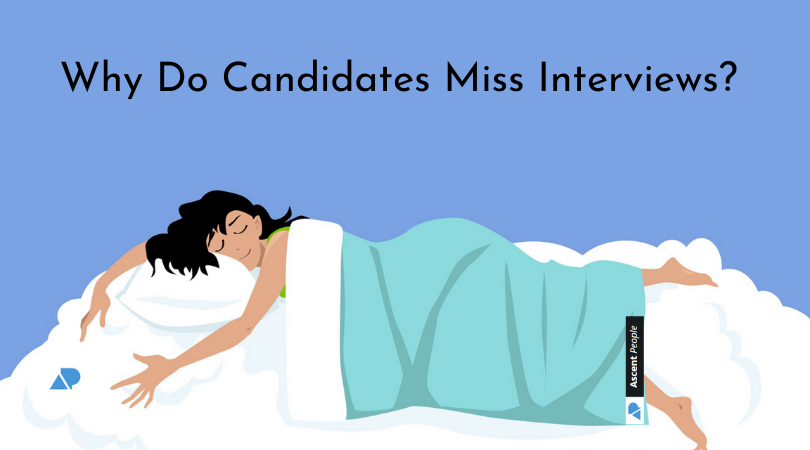 Why do IT candidates miss interviews? What really happens to them? Do they get lost, get a better offer or have they been abducted by aliens?

Sometimes it can’t be easily explained. The following instance happened to us recently, and we know it happens to other recruiters too.

But first, let’s look at the psychology of someone who:

It doesn’t make sense, why would someone go through all that time and trouble in readiness for an interview only to backtrack in a big way. Arriving at a point where they are not even willing to speak or communicate with the recruiter?

There was a definite time when they decided not to go to the interview.

And there was a definite time when they decided against phoning up to say “I’ve changed my mind, I don’t want to do the interview.”

What we think when candidates miss interviews

Every time this happens we ask the same question, has there been an accident or some emergency? Because that’s a natural reaction to someone missing an appointment. Something had to have happened.

Our first thoughts when the client rings us up to confirm a missed interview is always, ‘I wonder if they are all right, I hope they haven’t been involved in an accident or something.’ Because most people on stretchers don’t answer their phones.

It is human nature to assume circumstances were out of control. Not that they were wilful and complicit.

As such we always phrase our initial email to the candidate in the same way, “I hope you didn’t miss your interview because of an emergency,” secretly hoping that it was and our candidate’s reputation is maintained.

It nearly always turns out otherwise. They have decided to miss the interview and then go to ground. Only once has it ever happened to me that a candidate had actually been involved in an accident.

Once, in fifteen years of recruitment experience.

How much time and effort was wasted:

What does it say about the candidate?

There are a few legitimate explanations:

1.) They had a very good reason for missing the interview, but because of inexperience, they haven’t learnt an appropriate way to convey their predicament. They think their excuse won’t be believed and seek to avoid explanation entirely.

2.) Some sort of terrible anxiety, which means they are unable to provide an excuse, whether real or not, to explain their non-attendance. They automatically assume that this means they will not be asked back for another interview and hence the entire negotiation is off.

3.) They just don’t care. They have no sense of how their actions have impacted upon others and seek to avoid further, unnecessary communication.

The candidate should always be honest!

There is a bottom line here and it’s entirely appropriate and reasonable to cancel an interview or to realise that the job offer just isn’t right.

It is entirely reasonable to have some conflict with an existing role and back out, at any time.

It is the candidates right to do so. People have good reasons and bad reasons and these personal choices are usually respected by the recruiter.

However, it seems wholly irrational to suddenly go black-ops and disappear without offering any explanation or excuse. There’s a palpable ignorance in being unresponsive to both phone calls and emails from recruiters, especially after the candidate had authorised them to represent him/her at multiple stages in the process.

For a recruiter this is one of the more frustrating and unnecessary aspects of the job. It becomes worse when that same candidate applies to the same agency again (sometimes for the same job!)

The recruiter will remember them.

If the candidate’s CV ends up with the hiring company again, the client will remember them.

An Employers Guide To Salary Negotiation
What We Learned At The Recruitment Expo
Do You Need a Degree to Get an IT Job?
What Statistics Reveal That Helps Your Social Media #ITJobs Search
The 5 Lies All Recruiters Tell