A weaker economic climate and candidate shortfalls have slowed overall growth. IT Recruiters saw the slowest increases in permanent staff appointments and temporary billings for over 18 months. So what is going on?

According to Claire Warnes, Head of Education, Skills and Productivity at KPMG UK:

“The UK jobs market remained tight in September, with candidate shortages impacting recruiters’ abilities to fill jobs. Deepening economic uncertainty has also meant that workers are choosing to stay put in current roles, rather than apply for new roles, leading to a moderation in the overall rate of vacancy growth. Some employers, even those who anticipate that the recession may be short, are taking steps now to contain costs, including hiring freezes. Those employers who continue to invest in their workforce, particularly upskilling, may find they weather the recession better and will be in a stronger position to benefit from the upturn as and when it comes.”

“The challenges we see in today’s data reflects the underlying shortage of Labour the UK faces. With unemployment at record lows, pay continues to rise for both temporary and permanent workers starting new jobs, and activity levels across the recruitment and staffing industry remain high. While any economic slowdown this winter will affect the market, the extent of shortages mean that hiring will remain a focus for employers. “The REC has shown that failing to address these issues could cost our economy massively in the years to come. While there is much that Government can do, like reforming the failed Apprenticeship Levy, a lot of the answers lie with hiring businesses. Firms need to work with skilled recruiters on offers that will maximise the skill base we have. There has never been a more important time for business leaders to put the people stuff first.

Pay pressure eased only slightly. The rising cost of living and competition for scarce workers has driven further increases in starting pay for both permanent and short-term workers in the latest survey period. This was despite the rate of starting salary inflation moderating further from March’s all-time record to a 15-month low.

Where are the candidates?

Candidate supply continued to fall at a sharp pace, although there were further signs of the downturn in labour-supply easing in September, candidate numbers continued to fall sharply overall. Permanent staff availability deteriorated at a quicker pace than that seen for temp workers. A key factor weighing on candidate numbers was a greater hesitancy among people to apply for new roles, driven by fears over the economic outlook. A generally low unemployment rate, skills shortages and further Brexit impacts also weighed on candidate availability.

The above data from the Office for National Statistics (ONS) shows a further slowdown in vacancy growth in the three months to August. At 1,266,000 the overall number of open roles was +20% higher than a year ago, but this marked the slowest annual rate of growth since the three months to April 2021. Furthermore, vacancies fell slightly compared to the prior three-month period (three months to May), when they hit an all-time high of 1,300,000. 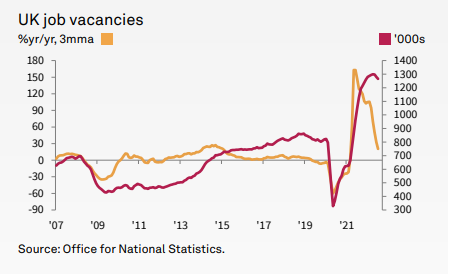 IT Jobs in demand: