IT Jobs Report March – The State of the UK Jobs Market 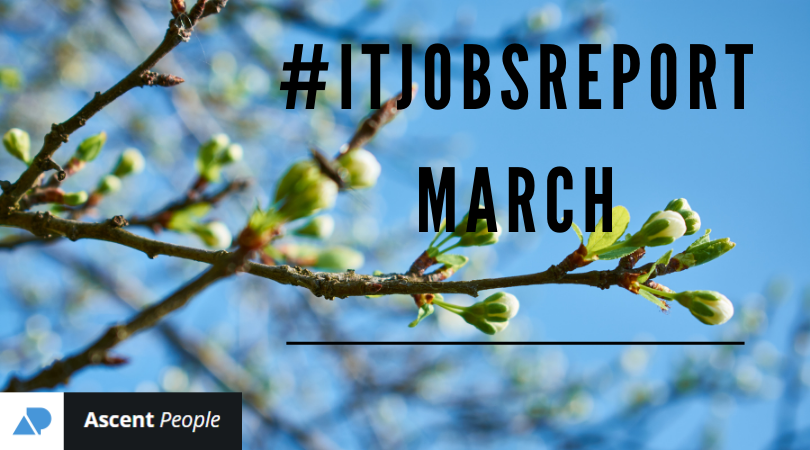 The big news is the ongoing national lockdown. It continues to be the major factor involved in hiring decisions last month.

In February we focused on the IT industry bucking the national trend and experiencing a slight rise in permanent and temporary appointments despite a corresponding slowdown in the rest of the UK’s sectors.

“Given the national lockdown that has been in place for the past two months, the labour market has coped remarkably well”. He further explained that, “permanent placements have only fallen modestly, while vacancies and candidate availability have stabilised.”

Using temp workers to tie over has meant businesses have managed to get through these particularly tough times.

According to the same data, the UK looks like it is well-positioned to take advantage of the Springtime optimism, nationwide vaccinations and the economic recovery that comes with it.

But this is dependent on restrictions being lifted.

The ongoing lockdown in the UK has managed to slow the spread of COVID-19 alongside the mass vaccination programme during February. This has led to another fall in permanent staff appointments, though this was much slower than January, which is a cause for optimism.

When it comes to pay, starting salaries fell modestly, while temp wages remained broadly stable from previous months. This could have been due to current sluggish market conditions.

Demand for permanent staff still rose across some of the ten sectors in February. While obviously sectors like Nursing, Medical and Care saw steep increases, this was followed by IT & Computing – validating last month’s inferences and IT Jobs Report.

The UK is in a good position for recovery once restrictions are lifted. This will provide a confidence booster and green light for firms, including the Tech sector, to start recruiting more heavily.

While Europe is feeling the squeeze tighter than the UK when it comes to restrictions and lockdown measures, this might provide an opportunity for the UK to steal a march.

James Stewert, Vice Chair at KPMG concludes where we are up to pretty well commenting,

“With that in mind, there was some good news in this week’s Budget. It was sensible to extend support measures like the furlough scheme and business tax deferrals, while health restrictions are still in place, and expand support for the self-employed. But more could have been done to tackle the big economic transitions we face, encouraging growth and reducing unemployment. For example, cutting employers’ National Insurance to encourage job retention and creation, replacing the failed apprenticeship levy with a flexible levy that meets the economy’s needs, and investing in job finding services with recruiters at their heart.”