A Short History of Machine Learning 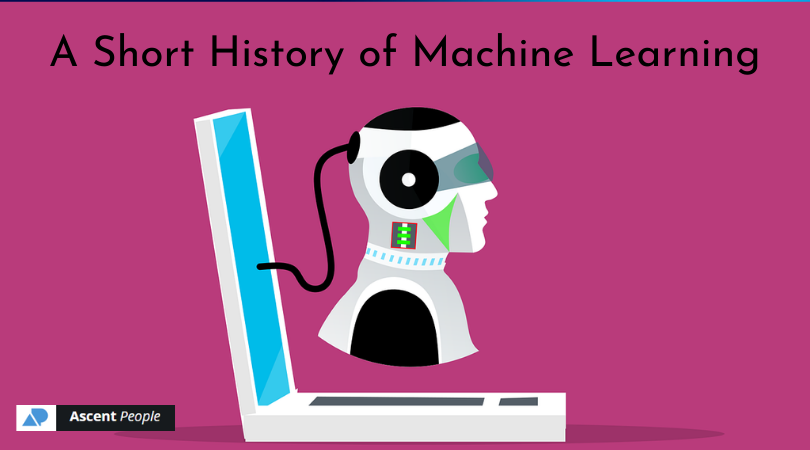 Machine Learning has been more prominent recently within tech news; a trend that isn’t going to slow down anytime soon. As it becomes increasingly integrated into our everyday lives, it is important that we understand its history and what it is.

From its roots, back in the 1950s until now, it has undergone a major shift. It is being adopted by the world’s greatest enterprises which can only mean great things for the future of Machine Learning.

What is Machine Learning?

Machine Learning is a branch of computer science which is centred around the creation of algorithms that can create predictions and learn from data. The idea is that a computer can learn from data without having to be directly programmed, as it is based around automatic methods. Computers will therefore be able to learn automatically without intervention from us.

Therefore, instead of asking the program to do a task directly, machine learning will allow it to come up with new ideas based on the specific patterns that it finds within the data.

It is closely related to computational statistics; due to its prediction-making using computers and mathematical optimisation. Although machine learning grew from the search for artificial intelligence, they’re approaches began to differ.

Machine Learning and the start of Artificial Intelligence

Alan Turing – Whilst working at the University of Manchester, Turing stated that his research “would be directed to finding out to what extent the machine could learn for itself” which was introduced in his paper “Computer Machinery & Intelligence”.

To test this, Turing created “The Turing Test” to see if machines had the ability to exhibit intelligent behaviour. The conversations between man and machine were evaluated by a human to judge the responses from the machine to see if they reflected natural conversation.

All conversation would be limited to text-only so the evaluator wouldn’t know which response came from the computer and both parties were separated at all times. The computer is said to have passed this test.

Arthur Samuel (a pioneer in AI and Machine Learning) produced “studies in Machine Learning using a game of checkers”. This was produced to see if machine could challenge a human when it came to playing checkers. The main component was the search tree of positions available from the current position of the board. It would attempt to find the chance of winning at any position and make moves that optimized the chance of this result. He continued to improve this until the mid-70s, when the game was able to challenge an amateur player.

Fast forward to this decade and machine learning was beginning to flourish. Now being recognised as a separate field to AI as it began to focus on tackling practical problems. Machine Learning went through a transition and became more centred around a data-driven approach due to the large amounts of data now available. Although Data Mining and Machine Learning can overlap in their methods, however Machine Learning is based more on predictions. Programs were created that could learn from data.

IBM’s Deep Blue also wins a chess match against the world-champion at the time, Garry Kasparov.

IBM’s Watson (question answering machine with the ability to present answers) wins a game of Jeopardy! Watson uses DeepQA software and was written in various languages such as Prolog, Java and C++. Google Brain is also created, which is a group at Google focused on Deep Learning focused on improving their products within voice search, natural language processing and object classification.

Facebook created DeepFace which is a facial recognition system created by a research group. It recognises human faces within images that are uploaded.